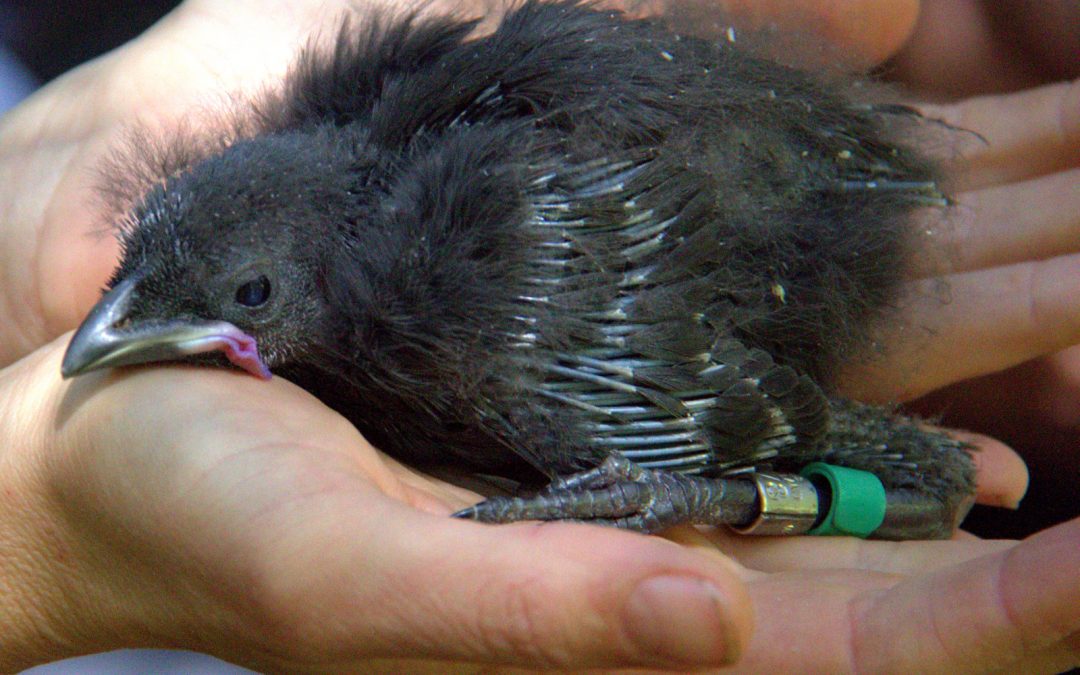 The 2020-21 season saw 6 new members of our kōkako whānau from our 6 monitored pairs, as well as unknown number of other chicks from our un-monitored pairs. Before chicks leave the nest, they are given unique combinations of leg bands so we can track them throughout their lives.

Their bands are also uploaded to our website: if you see or hear a kōkako anywhere in the Waitākere Ranges, please let us know so we can track their population, follow up with pest control, and share the exciting new with our Ark in the Park whānau. Check out Volunteer Resources page to record both kōkako sightings and those of toutouwai (North Island robins).

One of the kōkako chicks from this season has been seen to be flourishing – this story from our neighbour and buffer zone member Robyn sent through on a Monday morning of April:

“I have to share an incredibly exciting experience this morning.

I was just coming back from the Waitākere Dam walk just before 9 today. I heard the kōkako not far from carpark. I slowed down and listened, heard it a few times.

Then I was just going to the car, when I heard it again and could see it in a tree clearly. It was too far away to see distinctly, but I watched him/her for a few minutes. I was just about to go when it took flight and came closer into the trees by carpark…THEN!!!!! It hopped down on to the grass and green herby plants growing behind the pile of gravel and started pecking at them! I could not believe my eyes. S/he stayed there for at least 2 minutes. Lots of smaller birds in tree above him/her eating the black berries. (Fantail, silvereye I think).

S/he flew away at this point and I thought it was the end of it. However, I moved in closer and then spotted him/her on the nikau berries. I could clearly see its leg band, red and yellow I think. I couldn’t believe how big it was either. It didn’t appear to have wattles though. I was about 3-5 metres away. Just a gift to start my day, I’m so elated. Unfortunately I did not have my phone with me so couldn’t take any photos, but thought it was rather unusual to see it at ground level and so close.”

Following up Robyn’s observations, we know this was a juvenile chick (as it didn’t yet have its characteristic bright blue wattles, or werewere kōkako), and the Red-Yellow banding matches a chick hatched this season by Ātaahua & Kapua! Awesome news, and the outcome of the dedication of all of our Ark in the Park volunteers, most notably those involved with nest monitoring. Also a huge thank you to our supporter Auckland Zoo, which conducts and discounts our annual kōkako census. This crucial research helps us track the growth of the kōkako population, and lets us know exactly where each individual or pair has established a territory so we can effectively support their recovery.

We are also working with local kura/schools to suggestion names for these kōkako who get named on their first birthdays. We are building a list of te reo Māori names to reflect their whakapapa – our Waitākere Ranges kōkako were lost in the 1930s, so the kōkako here today were gifted by iwi from Waipapa, Tunawaea, Mapara, Tiritiri Matangi, and Mangatutu. Kōkako are of Aotearoa, and we are kaitiaki of their population and habitat.

If you have contacts at a local school that would like to get involved with suggesting some names, please get in touch with Sam at s.lincoln@forestandbird.org.nz. Once a list of suggested names is built, we will get in touch with our mana whenua Te Kawerau ā Maki to approve the list, as well as contacting the iwi who gifted the translocated kōkako. After this, we’ll open up voting to rank the names – watch this space!!